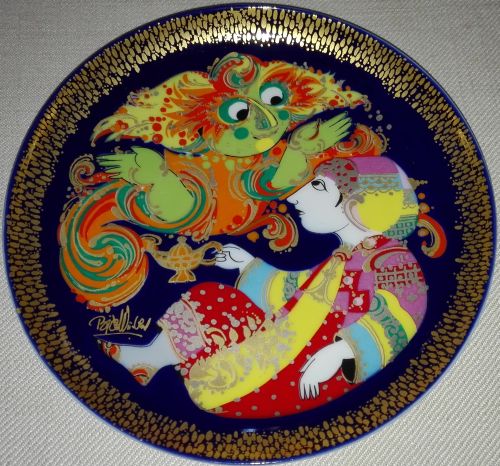 The series of plates was designed by famous Danish artist Bjorn Wiinblad.

The Aladin collectors' plates tell the story of one of the best-known figres in "The Thousand and One Nights". Aladin, fortune's favourite, who discovers the world's greatest treasure and emerges unscathed from even the most perilous situations.

Bjorn Wiinblad tells the story in twelve scenes, portraying the twelve most important stages in Aladin's progress. Each plate is decorated in brilliant colours on intense cobalt blue. The gold ornamentation gives heightened effect to the illustrated scenes.

Motif 1: "Aladin and the wonderful lamp"
It is the title motif of the series, and depicts Aladin talking to the Spirit of the Lamp, who fulfills all Aladin's wishes.

Motif 2: "Aladin plays with the street urchins"
A scene from the Oriental city where Aladin lives. His mischievous tricks are the most daring and yet the street traders make him gifts of the finest fruits.

Motif 3: "Aladin meets the magician"
An African magician chooses Aladin to bring him the wonderful lamp from out of subterranean enchanted garden. He makes Aladin a gift of fine clothesand entices him into the magic mountain.

Motif 4: "Aladin imprisoned in the enchanted garden"
When the magician demands the lamp, Aladin becomes stubborn and refuses to hand it over. Thereupon the magician employs sorcery and locks up the garden. Aladin gathers many of the flowers and fruits in the garden, which in reality are jewels.

Motif 7: "The Genie of the Lamp Appears Before Aladin's Mother"
Aladin and his mother are very hungry and wish to sell the Magic Lamp in the bazaar because they have no money left. As Aladin's mother polishes the dirty lamp with water and sand, the genie appears and offers her his services

Motif 8: "Aladin's mother brings the Sultan fruit from the Enchanted Garden"
Aladin asks his mother to please for him with the Sultan for the princess's hand in marriage. His mother presents the Sultan with fruit from the enchanted garden, and he, overwhelmed by the costiness of the jewels, gives his consent.

Motif 9: "Aladin rides to the Sultan's palace"
The Genie of the Lamp conjures for Aladin the most beautiful clothes, a magnificent Arabian stallion, a retinue of servants in splendid attire and ten sacks each containing a thousand pieces of gold. Aladin can now ride to the Sultan's palace as a rich man.

Motif 10: "The Genie of the Lamp builds a castle for Aladin"

Motif 12: "And they lived long and happily together"
Aladin has changed from a street urchin to a loving father of the family. This plate shows the happy end of one of the most beautiful tales in "The Thousand and One Nights".

Plates are marked on the backside with standard Rosenthal Studio-Linie, Germany mark in gold.