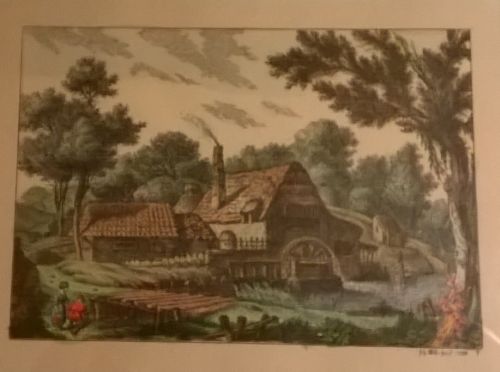 Johann Georg Wille (Jean Georges Wille) was a notable engraver born in Germany and active in Germany in France. Wille was born in 5 November 1715 in Obermühle am Dünsberg as the eldest of seven children. As a six or seven years old child he started to attend a school. His results were good and the only problem seemed to be drawing his friends portraits in school books. He also made many sketches of the Konigsberg castle destroyed by Swedes during the Thirty Years' War. That's when drawing landscapes became his passion.

His talent was soon recognized and he was sent to Paris. As Wille reported in his memoirs, he and Diderot being at their twenties had rooms at the same house in Paris. They were friends for many years. His early works were mostly portraits. Later he concentrated on historical and genre subjects. His inspirations were paintings of contemporary Dutch and German painters.

Failing eyesight started to exert growing influence on his situation. Wille's conections with French royalty wasn't his best asset when the French Revolution came. He lost all of his property and died in poverty in 1808.