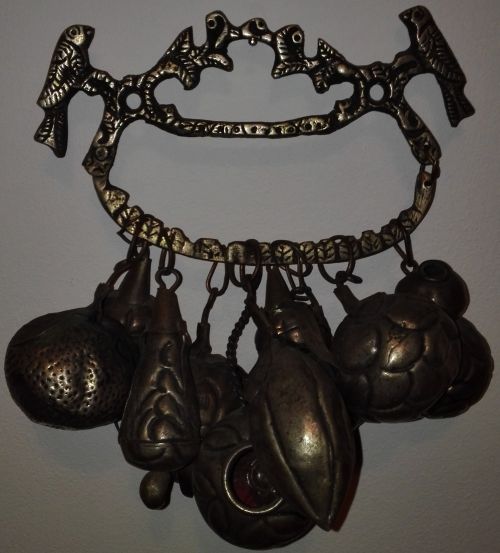 This Penca de Balangandan is made of brass. The holder is 16.5 cm wide and fruits are up to 10 cm long. It has ten fruit charms.

Penca de Balangadan is a part of Brazil slaves history. This kind of jewelry was popular in the region of Bahia since 17th and 18th century. These amulets were traded as investment. Sometimes they were given to slaves by plantation owner as a reward for good behaviour or special services.

They were usually made of silver, brass, or copper. Most often they were pinned to a garment. Bigger ones were placed in doorways to ward off evil or for good luck.

Penca de Balangandan were full of meaning. Shape of a holder resembled slave ships. Two parrots, owls or hawks facing each other on a holder represented Africa and Brazil.

Charms hanging on the holder also had specific meaning. Many of them represented gods in Yoruba religion or Christian saints.