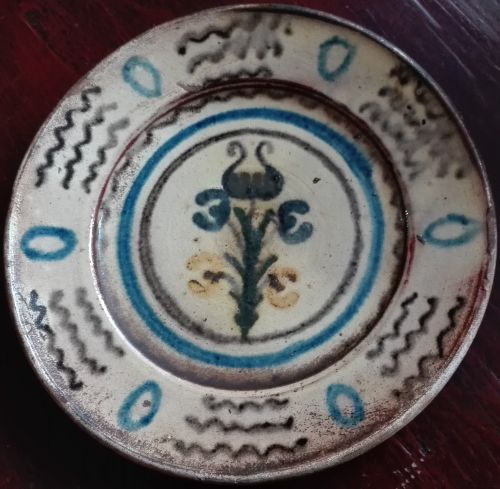 The plate was made in Chmielno in early 20th century. 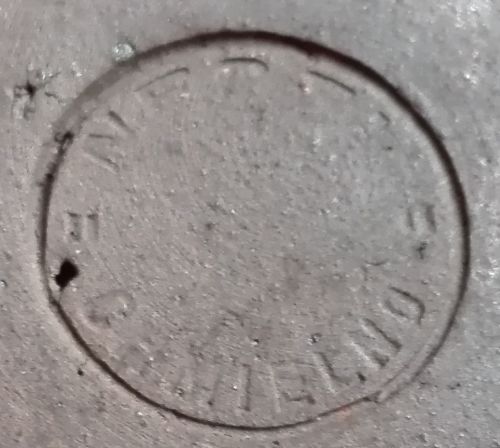 The Necel family has been in the pottery business for ten generations. Their pottery is located in Chmielno in Kashubia region, Poland. It was established in 1907 by Franciszek Necel. Franciszek in 1897 moved to Chmielno. His father Michal Necel VI (1831 - 1895) owned a potttery in Koscierzyna. After father's death Franciszek sold his business in Koscierzyna and decided to try his luck in America. Finally he had to return home after a few years, with almost no money left.

In Chmielno Franciszek Necel VII (7th generation of potters in the family) started working as a peon in Szczepan Kręczkowski pottery. In 1907 he was finally able to start his own pottery. Crisis in the pottery business forced Franciszek to concenrate on decorative pottery made primarly for tourists. He remained faithful to tradition using motives that have been characteristic for Kashubian pottery: lilac branches, tulips, the Kashubian star, fish scales, the Kashubian garland, and the lily.

Already in 1920s the pottery was renowned as a folk art center. It was visited in 1923 by a president of Poland Stanislaw Wojciechowski. Franciszek Necel died in 1935. The family tradition was continued by his son Leon Necel VIII. Leon inherited not only pottery but also talent. He swiftly gained a huge group of customers. His potetry was even exported.

The pottery stopped production during German occupation. Leon was black listed by Germans and had to escape Chmielno. He returned in 1945 but the pottery was completely destroyed and production began only in 1946. But political changes influenced future of the pottery. In 1950 it was overtaken by state folk art firm "Cepelia". Leon Necel died in 1968.

Leon's son Ryszard inherited all traditional family patterns. In 1979 the family regained its property. In 1993 the pottery was changed into "living museum" of ceramics. Ryszard Necel died in 1996. Family tradition is continued by Karol Elas, who also took name Necel.