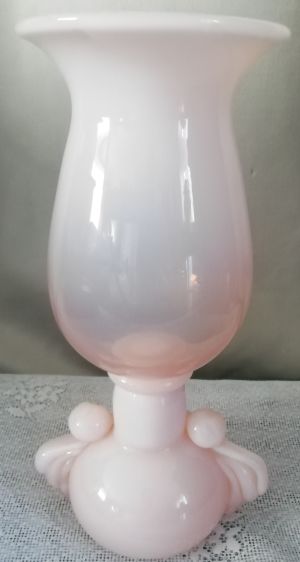 Krakowskie Huty Szkła (Kraków Glassworks) was established on January 1, 1951 based on the assets of the company Krakowska Huta Szkła L. Bąkowski, D. Chazan i Spółka, operating since 1931 at ul. Lipowa 3. Bottles and glass for pharmacies were produced here in 1930s.

The Krakow Glassworks existing since 1951 also included a glassworks from Skawina and Wawel Glassworks located at Zabłocie Street.

In 1962, the Glass Industry Research Center was established at Lipowa Street. Finally, at the beginning of the 1970s, the center was connected to the glassworks operating here.

In 1972, the Krakow institution became a branch of the Glass Institute in Warsaw. It was the best period in the history of the Institute, which employed half a thousand people and collaborated with many well-known designers. In 1968, Jerzy Słuczan-Orkusz began his work in Krakow, and as early as 1969, the experimental production of hand-formed artistic glass began. Other artists creating here were Marian Gołogórski, Michał Jakubas, Monika Orkusz, Zofia Pasek and Barbara Świstacka. Art glass production was stopped in 1998.

In 2014, the Lipowa 3 Glass and Ceramics Center was created, where, among others, a collection of contemporary artistic glass items, which in 1969-1998 were created at Lipowa 3 Street.